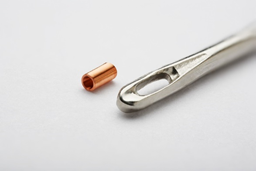 Micro coils which are created from materials like steel, aluminium, tungsten, gold etc. are called the non-copper coils, and they do not create any magnetic induction as the copper coils do. The non-copper (only steel) used as a heater. Here the coil wire is not isolated. It’s an expose metal thread coil which is also called hitter coil. The thread will be isolated if the coil works as an inductive coil.

Heaters are wrapped around with tubes which are made of steel. These tubes are pumped with the gas, which creates a 40 mm bubble of frozen area inside the body. The frost freezes cancerous tumours. Finally, malignant tumours absorbed and perish. This treatment is called cryo cancer treatment.

Working principle of micro coils as a heater for cryo cancer treatment:

This process includes freezing an element twice. For example, it’s the same when we often freeze a piece of meat twice and later put it back in the fridge. Suppose we freeze the meat for a while and after that take it out and deforest it. Again, we take that meat and keep it back inside the freezer. Though we do this, still we try to avoid consuming that food. Because we know that if we freeze something twice anything, its tissues die. As in it decays.

The same method is applied for curing the cancerous tumour.

Here also cancerous tissue is needed to freeze it twice and defrost in between. Where the heater plays a vital role here.

The metal coil is wrapped around the tube. It is heated to a certain temperature, and it defrosts everything.

Later the needle is removed when the coil becomes hot because when we touch a cancerous tumour and exit the body the metastases can fall on the healthy cells and spread away. So, when the coil is hot, burning and sealing blood vessels are present at the moment the work is done. Later existing and Sterilizing should be done with utmost care because then there will be no danger of falling metastases.